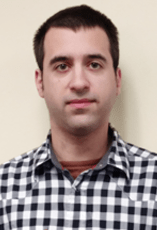 Rick Gearhart is currently the Station Manager for TV34, Montclair. He graduated with a degree in Creative Arts & Technology from Bloomfield College in 2010. He is 34 years old and started his television career when he was 21 – in 2009, working for WBMA-TV in Bloomfield, filming, and editing local events & meetings. It was here that he learned the importance of not only keeping residents informed of the events in town, but also the importance of preserving township history through video, by covering ceremonies, honor events, etc. Community Television has been the bulk of his television career, having worked for several different towns as a camera operator and editor, including Scotch Plains and Princeton, before being hired as the Station Manager for Montclair TV34. He has been at this position since December 2016.

Get the Green Light for Green Screen Lighting

About Us
Schedule
Speakers